I am an artist living and working in Harrow, London. Since taking my MA at London Metropolitan University in 2003, I have continued to explore sign and symbol through painting, textiles and sculpture using recycled material. My work as a whole draws on North and West African textiles and pre-classical European culture, in addition to the various aspects of Malian art and architecture.

My interest in the mud architecture of Mali led me to visit the country in 2006. Out of that visit came the interest in Bogolan and the pursuit of the technique to express my own ideas through the medium. This in turn led to the idea of collaborating with Mali artists and in February 2008 I was able to meet Kader Keita to discuss working together. The results were exhibited at the conference organized by the Mali Development Group and the Malian Community in London in November 2008. A joint exhibition at Hay on Wye followed in 2010.

Tapestry. I have been making flat weave tapestry for nearly twenty years since taking the first of many courses at Morley College, London. More recently I have become involved in contemporary tapestry through the British Tapestry Group.

My tapestry work is inspired by Moroccan rug making with its vibrant colours and the mix of formal pattern and improvisation (the “system and meander” approach), as well as the mysterious vocabulary of symbols and motifs employed. This in turn feeds into Bogolan design. 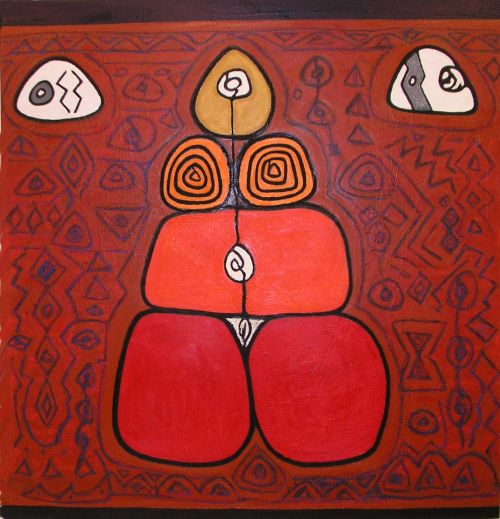